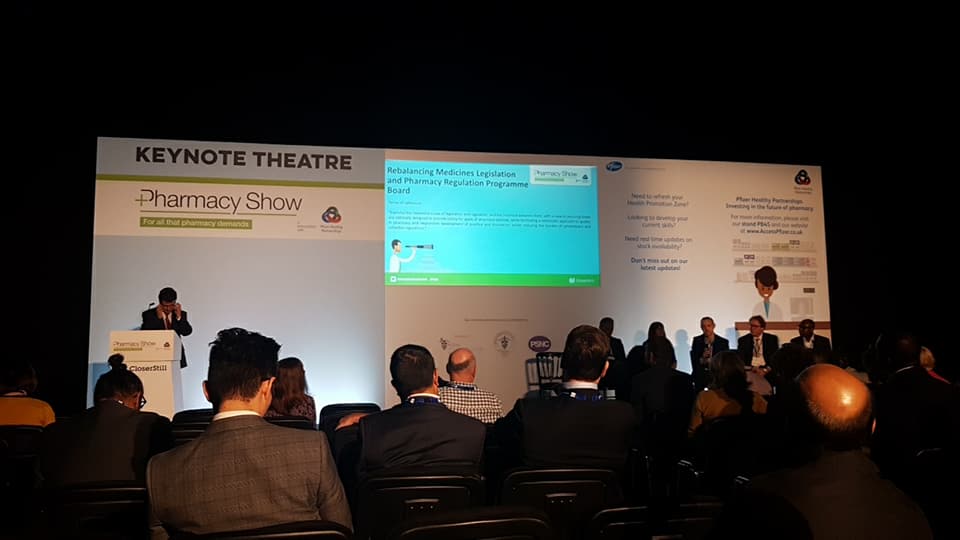 Pharmacy Show 20017 was  a great event this year. A place to network and cathcup with collegues we only ever talk to on social media. So here is a very brief run down of what the Pharmacy show was like this year. We met a lot of locums and managers. Spoke to a lot of key people in the profession about issues around remote supervision. The two main talks we attended were both regarding the re-Balancing board and the secret meetings. The first talk was done by a panel most of whom were in the secret meetings. That included Ash Soni, Tess Fenn of APTUK, Welsh CPhO, head of GPhC and a pharmacist from Bedminster pharmacy.I felt that was a very one sided talk and not inviting PDA and NPA was really not the right approach. I think a lot of concerns that pharmacists have around remote supervision had not been clearly answered. The message from that talk was very vague. they said we have nothing to worry about because no decisions have been made but they essentially want techs to be able to hand out meds in our absence so for me that’s definitely not what we want as it will impact on patient care and will most definitely be abused by companies. The argument the panel put forward was that it will free up pharmacists to do more clinical work but that’s the same excuse they gave in 2009 when they brought in the RP regs and 2 hour absence. We see every day how a lot of companies abuse that regulation.

The second talk was by Pda which was by far the most informative. Both the Pda and npa seem to be very passionate about ensuring techs do not hand out any meds at all in the absence of a pharmacist. Not to mention there are so many more issues that must first be dealt with before we even get to the stage where we would want techs to take on more responsibility. Also the fact that 75% of the techs have been grandparented makes me think they are definitely not fit to sell P meds in our absence let alone hand out POMs. Techs have their role within the pharmacy team and I do believe they are a great asset but Pharmacists they are not. I have so many reservations about this issue and I would really like each and every one of you to do more research on this topic so you have a better understanding of what is being proposed and the impact it will have on the profession as a whole. The Pda gave a very robust argument about the history of this topic and understood the possibility of abuse of the new legislation. Ian Strachan of Npa was also very clear and passionate about negative impact of the proposals and vowed to fight to stop these changes. In the next few weeks the Pda will be running a major national campaign to get the public on board and push for a more open and transparent debate and I think we should all get involved as it is our one chance to ensure remote supervision is not brought in. I will be organising a meeting with Mark Koziol and the npa over the next couple of weeks to see how we as a group can support them.

We are at a time in our profession where everyone must get involved. There is no leaving it for someone else while we take a back seat as there won’t be a back seat to take if the laws change and techs are allowed to hand out POMs. So we have a choice to either unite as one profession become active and make our voices heard or we let others change our profession to suit them. I can assure you if we let this slide now there won’t be much left of the profession. I do believe that if we as a profession come together and let the rps and Ash Soni know what we want from them and which direction we would like to take this then they will represent us but it is up to us to take the time and make the effort to let them know. I have faith that Ash Soni will do his best to support the profession and take us in the right direction.